The event was a complete mess, the stream didn't work, the rules weren't explained and the hosts were just terriable.

In the end the TR were the winners because when the stream was down they announced that the whole thing was just a facebook / twitter vote and the fighting during the event didn't mean anything.

If I had known that I wouldn't have bothered at all. Anyway I think this speaks clearly as to who the real winners are: 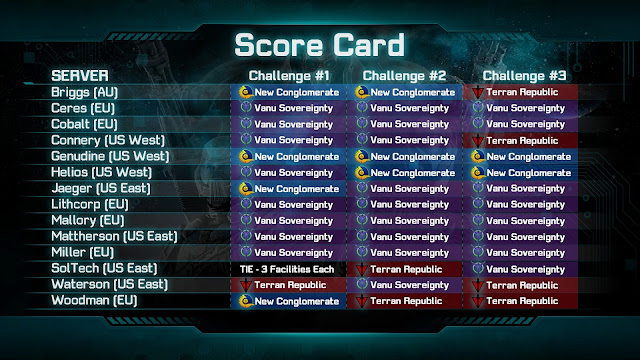 Still I did get the chance to kill some devs and be on the live stream but if they do any more of this I think I will pass.
Posted by Quanhan at 11:44:00 AM No comments:

Archeage coming to the west

Triton worlds ( Rift ) have announced that they will be publishing the western version of Archeage.

I am not sure what to think of this. Rift was super generic fantasy and I have had a terrible customer treatment with them ( 3 name changes due to servers becoming ' trial servers ', loosing all my characters names ) also they are launching Defiance another MMO.

Still if done right they would only be handling the translation of rift into other languages but I just keep thinking of Aion being a year or 2 behind the Korean version. So I want to be excited that its coming but I just don't know what to think.

The next story arc for Guildwars 2 is coming:

The sky falls and the ground shakes in the lands of the north. Charr and norn refugees crawl from the wreckage of their homes in the Wayfarer Foothills and Diessa Plateau, struggling to find shelter in the south. The call goes out for volunteers to assist the victims in this time of need, when earth and sky seem to have become the enemy…


Also included in this content patch is the new achievement system, more ways to get gear, realm guesting, UI Improvements and WvWvW performance.

TotalBiscuit assassination of the VS Leader

Total Biscuit, leader of the terrain republic announced today that Tobuscus had been assassinated and replaced with Levelup.

You can hear his propaganda speech here:

Can't help to think that this is going to actually help the VS more than harm them.

So there is no sadness in the loss of our Leader.
Posted by Quanhan at 5:33:00 PM No comments:

Patch notes for the hotfix. Sound like good changes, liberators should require a bit more skill now but to balance things MAX's are no longer invisable. Also like the spotting change, no more Q spaming to locate people.

The best thing I liked about Guildwars 2 was the World vs World PvP game and the Pve world events. When fractals were added I started playing the game less due to feeling forced to do the thing I hate in MMO's. Run the same dungeons over and over.

This video though shows that they are swinging back away from closed 5 man dungeons back to massive world events.

SOE has released a list of upcoming features for the patch on the 30th. I like the sound of the new XP system as a AAA MAX I get cheated out of alot of air kill XP.