The day of the Doctor

The update is so massive, I'll just link the wiki:

Server is now running 1.7.2 but on the orginal map. The nether has a transport system to the ' Frontier '

The Frontier is a area far enough away from explored areas that it has all the new content.

Eventually I'll setup a commandblock transport system between the original area's and the Frontier.
Posted by Quanhan at 11:33:00 AM No comments:

Stay away from this game, its EvE desperately trying to combat with other titles but not realising why people want to play theses other titles.

In a recent interview Valkyrie sounds like its going to be like Dust and there is a good chance that it will release on consoles first. Even though its built for the Oculus Rift.

RPS: So EVE and Valkyrie are both PC games, but Dust is – for now, at least – only on PlayStation…


While there  is nothing technically stopping the rift from working on a console except  the Oculus rift as it currently stands is very low res. They are talking about doing 4k screens for the release version which will solve so many problems. Just you need something that can handle 4k res at over 60fps.

The Rift needs a high frame rate, otherwise it breaks the immersion. This is why Doom 3 BFG runs at 120FPS for the Rift.

The diffrence on running the rift on my Home pc vs my slow not game tuned work PC is night and day.

Next Gen Consoles have already stated they are targeting 30fps at 1080p.

This is not good enough for the rift. While I can see them doing 720p at 60fps, it will be upscaled.

Lastly there history of creating features and leaving them for dust ( pun >.< ) goes back to the creation of EvE.

This game will not stop people from playing StarCitizen or Elite. At its best it will feel like the space combat of SW:TOR, tacked on mini game.

Link to interview that started this Rant off:
http://www.rockpapershotgun.com/2013/10/25/ccp-on-how-valkyrie-will-fuse-with-eve-evolve/

News came out today that that PS4 can render at 1080p at 60fps in games like Call of Duty, I can't comment on the Xbox One as microsoft are refusing to let people compaire the two consoles.

Does this change much for the rift ?

With the current dev kit that runs at 720p, it means you might get a decent frame rate on the PS4 but I still don't expect it to work well at a 4k res unless it was a basic game rendering wise.

Labels: Not a game, video


Bettween this, Star Citizen and Elite. I have no reasion what so ever to play the point and click of EvE just to get a space fix and it is fantastic. Vive la Space Sim !
Posted by Quanhan at 7:35:00 AM No comments:

My new all time favorite animated series
Posted by Quanhan at 2:48:00 PM 1 comment:

Not content in recycling last years content, the Guildwars 2 team have come up with a new plot line for this Halloween.

Episode 1 of the Arma 3 campaign starts on the 31st of October.


“Our first campaign episode, ‘Survive’, introduces players to Ben Kerry, a regular soldier who’s part of a NATO peacekeeping mission in the Mediterranean. Following a couple of years of uneasy cease-fire, this US-led deployment is now in the process of a staged drawdown. The vacuum left by withdrawing forces is being rapidly filled by the opposing CSAT faction, creating the conditions for, one might say, a flashpoint”

This is the first official Free DLC from Bohemia Interactive and will feature new characters, weapons and other toys for the sandbox mode. 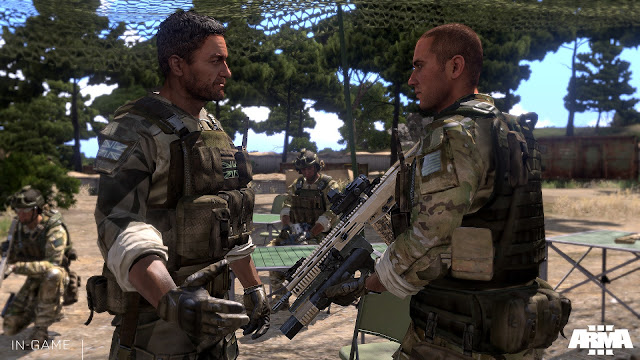