Overgrowth let the dogs out

The next 7 years of darkness: Microtransactions

I jokely said that Dragon Age 3 will bring on the next 7 years of darkness with it being one of the first RPGS released on a the Xbone / PS4. But it turns out that is nothing compared to whats really going on.

Now I am not talking about DLC because most DLC isn't micro. What I am talking about is boosters and faster unlocks if you throw more cash at it.

Microsoft seems to be leading the charge but Sony is doing it as well.

I need to check into Bravery Default on the 3DS which gets listed to see if its is true that it can suck money to make the game go faster because if it does I will no longer be getting it.

What ever happened with making a game fun instead of making a game broken and forcing people to spend more money to play it properly.
Posted by Quanhan at 7:25:00 AM No comments:

To sum it up, yes I do like this game. It has bugs and issues but I have been having fun.

Should you buy the game ?

Problery not right yet, this feels like a early access more than a complete game. I don't even know if its finishable due to being stuck on what seems like a impossable mission.

I own all the X games excluding X-Tension expansion due to it never being released here in the stores. My overall feeling of the X-Series is that it has some good elements but on a whole is quite a dry space game. Much the same way I feel about EvE Online.

X Combat was one of the biggest issues. Dog fighting just felt flat, this coupled with the feeling you were just flying a camera inside a cardboard box didn't really help. Sure the game had a boost key but all it did was get your ship up to max speed. Guns emptied there charge too fast and took too long to  recharge and after a while the combat just became routine.

Rebirth changes this with a combat feel that more like Wing Commander. Boost now accelerates you faster than your max speed, allowing you to catch up to targets but in return drains your shields. Guns now over heat, shutting down but quickly will cool and the new open world system adds for more interesting backdrop to fight in.

A few times I have been hunted down by wings of enemy ships and my option is to cut my losses and run. Making a break for the closest highway ducking between stations for cover.

I was never a big empire builder in X, due to not having the time to set one up and he lies the problem I think is causing so many negative reviews for Rebirth. People expected to be able to make the same old empires but this is a new game in a brand new engine.

So to the X fan, the game is flawed, it shouldn't ever been released and everyone should demand there money back. To me, the space fan, X is a wonderful game with adventure and exploration. I expected more of the same with X-Rebirth but was pleasantly surprised to find a new game.

One thing, the voice acting is still terriable along with the writing. This isn't freelancer when it comes to story. 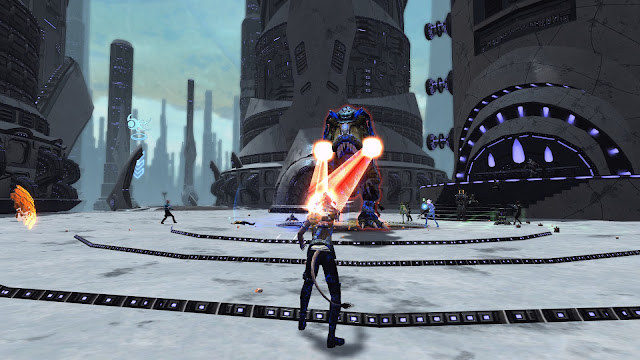 Guildwars 2: The Nightmares Within

Arma 3 first singleplayer episode was  push from the Dev Branch to release this weekend and I have been giving it a good thrashing.

So far this is the best singleplayer arma experience since Operation Flashpoint.

The game so far has been very guided. Allowing you to just get on with the action without the worry of managing troops. OFP ( Operation Flash Point ) was much the same.

The story so far is very typical Arma but its exciting and well executed.

Pacing is also fantastic. I enjoy the running around with little action because when the action hits it hits hard with all the confusion of a battlefield.

This release of Arma also included a ton of new features. The game now renders sun shafts, while they may be a bit too bright it still adds to game nicely.

The biggest update of all time, the update that I have been wishing to be added since Arma 1 is improved rain.

Finally we get none leaky buildings and weird effects with flat 2D rain. Every drop is now simulated and it looks fantastic. Now to just get some inside  rain sound effects ( hitting roofs / over flowing gutters  ) and it will be perfect.

I had put 25+ hours into the game before its singleplayer part was added and the game still feels fresh. I only lasted 30 mins with Battlefield 3 before I was completely bored of it.

Arma 3 is the FPS I enjoy. Its not all about head shots or trick flying but instead the simulation of combat.

A guy who visited my work place said that Oculas Rift support is in the works for the Amra engine ( Dayz ) and I can't wait to try it.