Following after Everquest 2 Sony have announced the orginal will also go free to play soon.

The question I have is, when will vanguard go free to play ?
Posted by Quanhan at 8:21:00 AM No comments:

Its looking good, now can it keep the gameplay from the first game. 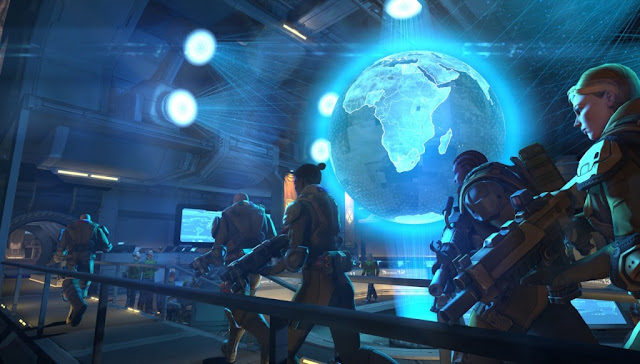 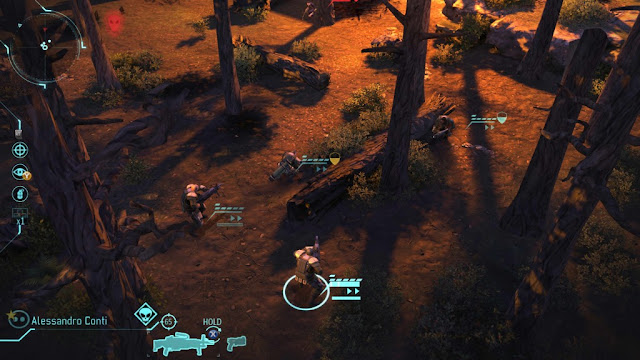 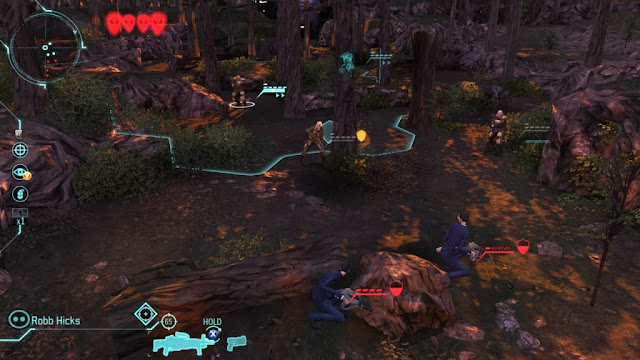 Something about a console version as well but whats more important is the new PC enhanced edition free to existing owners of the game:

New major adventures set in new locations. These consist of an underground system of chambers beneath Loc Muine and a temperate coniferous forest in the Loc Muine mountains, and a secret cave passage. These new adventures will add several hours of story-based gameplay to the game.

New major characters to the Witcher story. One of them is Brigida Papebrock Dame. This noble woman comes from the Temerian family Papebrock and is a 30 year old lady-in-waiting of the Temerian court. The other characters are secret--for now!

All new animations and cut scenes, including a new, three and a half minute pre-rendered cinematic depicting the assassination of King Demavend of Aedirn. BAFTA Award winner and Academy Award nominee Tomasz Baginski brings this key historical event to life, setting the stage for the story told in The Witcher 2.
Posted by Quanhan at 11:26:00 PM No comments:

We’re excited to be showcasing Blizzard eSports on a truly global stage this year. We're also heavily focused on getting Diablo III, Mists of Pandaria, and Heart of the Swarm into players’ hands as soon as possible. In light of our jam-packed schedule, we’ve decided to hold the next BlizzCon in 2013.

More details about the 2012 Battle.net World Championship and BlizzCon 2013, including specific dates and locations, will be coming in the months ahead.

Well thats a shame, I had a cunning plan this year to try and get in with out battleing the cues for tickets.
Posted by Quanhan at 8:13:00 AM 2 comments:

Press Beta starts in Feb, with it ramping up in march to invites.

I am still trying to find out how this will work. I got the following quote from a Dev:


You can walk around on station platforms and inside your playership by moving from one point to another. So YES you can move in real 3D and interact with people, but NO you are not freely moving as in a FPS (also you dont have a gun for that

To move you will select a task and move then quickly to the appropriate place. The player will notice everything radically in the first person view (especially in the virtual reality this will be obvious).
Yes you can leave your ship to come in contact with NPCs on plattforms.


Which doesn't answer anything.

You can walk around from one point to another in real 3d but you are not freely moving as in a fps ?!?

My guess is it will be like Starcraft 2 style adventure game which was between missioins.
Posted by Quanhan at 9:45:00 AM No comments:

Skyrim Creation Kit by the end of the month

There’s a lot of work left to be done, though. We’re constantly tuning and making balance changes; it’s a massive task. Some of these changes can be seen in the beta, like changes to item rarity, the levels at which we introduce affixes, and how many affixes enemies can roll up. Some you can’t see in the beta, like balancing the difficulty of the entire game for four different difficulty levels, adding tons of new affixes, creating legendary items, filling out crafting recipes and itemization, working on achievements, and implementing Battle.net features. We’re also working on a number of other large systems changes -- specifically with the skill and rune systems. We're not quite ready to share what those are just yet, but we look forward to being able to do so in the near future.

We want Diablo III to be the best game it can be when it launches. To get there, we're going to be iterating on designs we've had in place for a long time, making changes to systems you've spent a lot of time theorycrafting, and removing features you may have come to associate with the core of the experience. Our hope is that by embracing our iterative design process in which we question ourselves and our decisions, Diablo III won't just live up to our expectations, but will continue to do so a decade after it's released.

Will they haven't annocuned a relase date, its sounding more unlikely its going to be ready for March.
Posted by Quanhan at 8:22:00 AM No comments:


We're sticking with a 10 character limit per region for the foreseeable future.

Now if they only up the 10 character limit pre server in Warcraft.
Posted by Quanhan at 8:15:00 AM No comments:

I ran a post on my old forums about this fantastic space simulator game. Sadly a few years back they stopped working on it.

Today I discovered that it is now free to download and open source. You can download it from:

You just have to register first before you can download it.
Posted by Quanhan at 5:31:00 PM No comments:

Rumor has it that the Warhammer 40k MMO has been canceled and THQ might be up for sale.

This will be sad as I like THQ as a publisher and the 40k MMO had my interest.

But in saying that the screenshots I have seen of the 40k MMO makes it look like a warcraft clone which just wouldn't work.

I also fear what will happen to Relic. Hopefully someone decent picks them up and the Warhammer IP licence as well. I'll post more news if its confirmed.
Posted by Quanhan at 5:31:00 PM No comments:

Mass Effect 3 is only on EA Origin. I won't start my rant on Origin again but this is why I won't ever get Mass Effect 3.

EA Claim it to be this:


Will ME3 be available on Steam?
During initial release Mass Effect 3 will be available on Origin and a number of other 3rd party digital retailers, but not on Steam at this time. Steam has adopted a set of restrictive terms of service which limit how developers interact with customers to deliver patches and other downloadable content. We are intent on providing Mass Effect to players with the best possible experience no matter where they purchase or play their game, and are happy to partner with any download service that does not restrict our ability to connect directly with our consumers.

Strange way of spinning that they can't have there own 3rd party store and must use steam for DLC.

The funny thing is, I am more likely to buy DLC via steam than any other system. This is due to the fact that I already buy items via steam.

After the utter disaster that was Dragon Age 2 and Mass effect 2. I won't be buying another Bioware game. This is another rant in itself =p
Posted by Quanhan at 8:02:00 AM No comments:

Minecraft 1.1 is out, this does mean waiting for Ponycraft to be updated and the texture mods:

New Features:
Not a huge amount of new features but still intresting.

Sure there is the lame fps com coming but today Fraxis ( civ5 )  announced a real remake of the classic with real time geomap and turn based combat.
I have a feeling it is going to be a budget title as it is coming to PC and consoles. I just hope it doesn't have some wacky art style.
Posted by Quanhan at 12:42:00 PM No comments:

This is from the X Superbox trailer:

And the trailer itself:


The only game I don't own in this seriers is X-Tension. Due to not seeing it here in the shops.

The reasion I am linking this is I really like the X music. And you can get more from here:

I recently got X3-Albion Prelude and have really been enjoying it. So I decided to check out some Rebirth details and see whats been released.

What I discovered has gotten me hyped. First the bad news:

You only fly one ship & no longer fly capital ships.

The good news is you still can own fleets and can also remote control your fleet. The reason for the new ship is it now has 'Rooms' and crew on board. I also has a flight deck. No details how these 'Rooms' Will work. If you can FPS walk around them or if they are hotpoint static screens.

Next up is this about cap ship changes:

You can in fact even land on these beasts and get out of your playership to meet NPCs while watching the large ship move around in space FROM the deck of the ship!

You won't be sitting in the cockpit and steer such a capital ship from the first person perspective anymore simply because that is boring. Steering huge and slowly-turning ships manually just doesnt make sense. It would force us to make them turn and move unrealistically quick and even then they would be impossible to maneuver near our huge and complex shaped stations.


I really hope it sounds as good as they describe it. If it is, X will launch to the top of my scifi best game list. Here are some new screenshots. First one featuring the players ship. 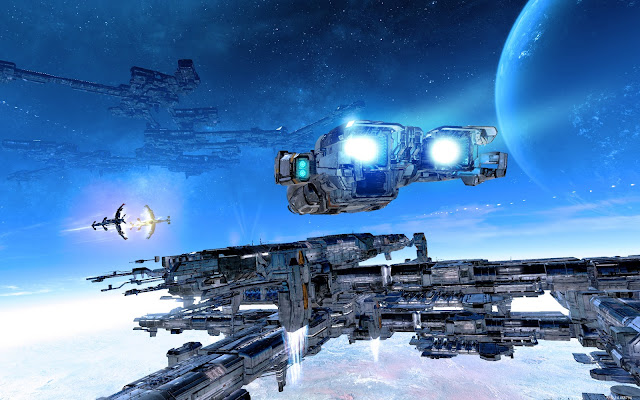 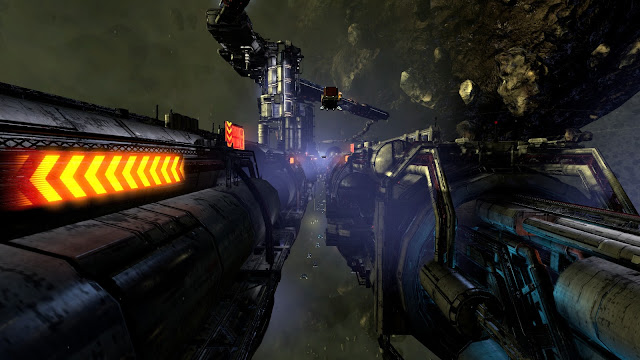 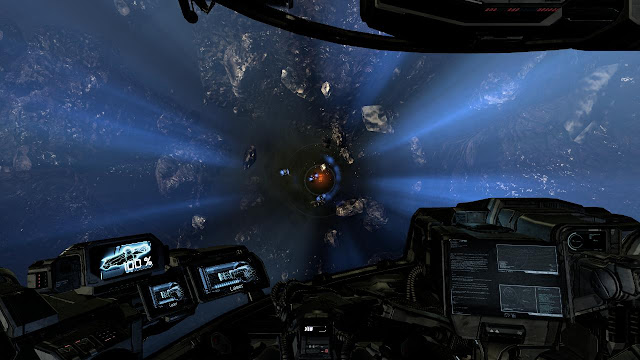 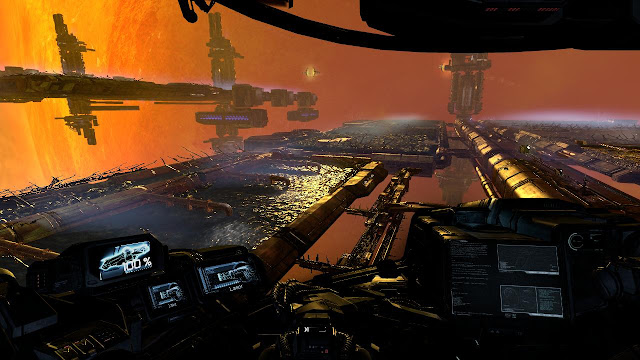