Much like the orginal witcher, a huge update has been released with new features and changes to gameplay.

I knew this was coming so I held back getting to far into the game. Full list of features can be found below.

Accually, I think FFXIII did more damage to the brand than a broken MMO which is being fixed.
Posted by Quanhan at 8:09:00 AM No comments:

I have heard that the PS3 version is the better of the console versions. The Wii version is slightly higher res and the Xbox version you don't need to install but here is a side by side view of the PC vs PS3:
Posted by Quanhan at 8:05:00 AM 1 comment:

There is now a version of Risk based on Metal Gear:

But does it take 20 mins to setup and then do you have to sit though 40 mins of the game explaining political and philosophical views before playing ?

Adam Jensen Does A Safety Dance!

It was funny, Darth mention Saftey Dance a few days ago:
Posted by Quanhan at 8:07:00 AM No comments:

What really happened to Jarjar

Diablo 3 has been delayed until 2012. I am hoping this is so they can rethink the always connected DRM which I have heard from the BETA sucks.

I do not mind having to log in to play a game. Steam does this seamlessly and doesn't bother me. Starcraft 2 was ok as well but with Diablo you are playing online and are relying on that connection for your enjoyment.

At launch of Starcraft 2 I was constantly getting messages that I have disconnected from Battle.net and that achievements would not be tracked or something and thats about it. My guess is Battle.net could hold the load. With Diablo 3 if this happens you will be kicked from your singleplayer game, loosing any progress since the last way point. You won't loose any items but you will have to hack your way across the map again. Also you can not pause in singleplayer because its not really singleplayer and if idle you will be auto disconnected from Battle.net.

This is why I am against Blizzards Diablo 3 DRM its full this increasing sort sightedness the company has been having since around 2006. Where is the voice of reason in BlizzHQ or did they all leave to go work on Torchlight 2.

In other news, now that EA know Blizzard won't have Diablo 3 out this year, The Old Republic has a Launch Date.

Unless you live outside of America and most of Europe. Then its unknown. What is known is the subscription costs are the same as every other MMO.  $14.95 USD per month.

If I was a Bioware network engineer I would be totally pissed off with EA/Bioware right about now. As they won't be getting a Xmas this year.

As mentioned a paragraph above, there is no talk on the release date for OZ/NZ. They won't even comment if the delay is because they are securing server space for us down here. I am not fussed, the game has lost a lot of its magic from a few years and my excitement is nearly gone. I put this partly down to Rift showing just how generic MMO's have become.


Summing up, I think Blizzard have played their cards well. The old republic will be out over Xmas then at a guess Blizzard will try to release around the 1 month anniversary of The old republic, tempting people to cancel there subs.


Bioware better hope that their game isn't a two week ride to the level cap. There needs to be enough content there to last 3 months on a single character. My guess is there isn't and they are hoping people will just rolls alts until  more content shows up.

Not sure what a pre-release is but its out and features the following:

Can vampires really be cool any more ?

Were they ever cool to begin with ?

Details of CCP next MMO ( and the main reasion EvE is dieing according to the forums ) is thier take on White Wolfs Vampire RPG.

From the sound of it, its going to be a Vampire Theme second life with permadeath.

Surely this should have put up alarm bells.

Still they didn't stop after the first one and lucas is contuning to ruin what was left of the classic movies.

Why do we even need ewoks that can blink, its not as though I was watching the movies thinking, gee its weird the Ewoks aren't blinking.

Asure week contines with a Animation sample video and Rata Sum:
Posted by Quanhan at 8:14:00 AM No comments: 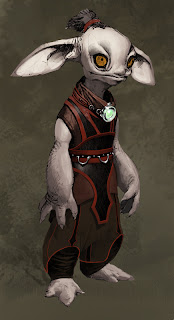 Today is the begining of Asure week on Arena.net

The first page has a bit about their background and the desgin behind the look.

The Asura are the last to be profiled meaning we have only one more class until everything about the races  and classes are released.

I plan on making a Asura and who wouldn't. For starters you can call everyone a Bookah. 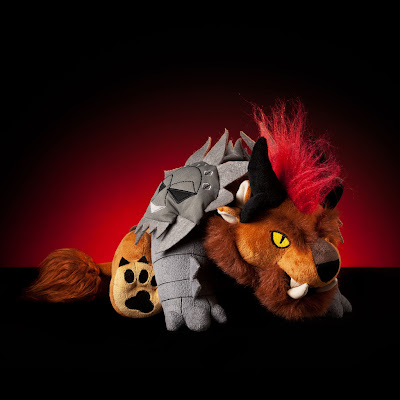 Penny Arcade store is currently selling them for $35USD.

They could have done a Asura but Charr makes them even more awesome.

Supposedly his tag reads Charrlie.
Posted by Quanhan at 8:13:00 AM No comments:

The free to play version isn't bad, but the subscription version doesn't have much incentive.

About the only thing that makes it tempting is the 400 C-Points a month.

This makes me wonder if C-Store items are going to go up in price. Because after 4 months you could get a free ship.

I also hope that legacy subscribers keep there bag, bank slots etc.
Posted by Quanhan at 8:08:00 AM No comments:

Its confirmed, Star Trek Online will be free to play later this year:

Any more details, I do not know but this was predictable. The way I see it, any game that offers a life time sub is going to go free to play. This is because once your lifers have reached a certain point then they become leeches and aren't adding to profits.

I just hope they do the free to play model right. I am happy to pay a sub to that game but it has to be worth it.
Posted by Quanhan at 6:01:00 PM 1 comment: