My thoughts on Blizzcon

So Blizzcon is now over and my impressions on this year is that it was a billion times better than last year.

First off they had something to talk about. Last year they only had Diablo 3 which is really hard to be interested in when its was still a year away.

First off the news that Heart of the Swarm is going to be a expansion not a stand alone game has me interested. It is going to be shorter than Wings of Liberty but this feels better than buying the same game 3 times.

Diablo 3 was kind of the same as last year. The real money trade auction house is interesting that they are letting people cash out for real money on items. I would be super worried about this if it was going to effect my game but the way I see it is I have no interest in the auction house or letting any randoms into my games so as far as I am concern it doesn't exist.

Now onto the big one.


Mists of Pandera for Warcraft.

I personally think this expansion is what the game needs. They are finally taking the game sideways. If you plotted out warcrafts expansions you would see this stead climb towards a even greater evil.

After that there isn't much left. Pandera lets us go back and just be ourselves in a new land. There is no looming evil. I am hoping that theres no Titan instances or lore in this expansion.

Titans feel like midichlorians, something added that just doesn't fit. They are almost as bad as troll instances with the way they pop up in game. They come off as technology in a world of fantasy. They need to be forgotten about, much like the Naru.

The other features which sound good is the new Talent system. Putting points into things has become a bit redundant and blizzard have seen this and so removed the point system all together. Now you just select 1 of 3 skills every 15 levels. I am not sure if this is going to make leveling feel a bit stale, nothings worse at the moment when you level and you don't get a talent or a skill.

PVP is a big push with many new game modes and a hint at Warcraft Dota. WoW Dota would be such a huge thing to the point where blizzard could sell it as a separate game. I have a feeling WoW dota will be something that gets pushed to the side lines.

Tech wise the engine upgrades look good. Blizzard are adding SSOA, does make me laugh when they hype it up but it is something very easy to add to a game.  They are toying with IK animation shown in the Pandera belts. They sway more dynamically than a canned animation. Full IK would be nice they could even add ragdoll system to the game if they did that.

The texture painting tools they showed in the editor blew me away, to the point where I am thinking of how to add this sort of thing to my game. Unity might already have something like this with Substance.

The Pokemon system, well I am holding judgement on that for now.

PvE Scenarios, I still don't really know what they are. When they talked about them it jumped all over the place.

Outdoor missions which are public quest for 2 - 3 people in a instance where you do battlegrounds against mobs ?

What they showed was something that looked very much like rifts system for rifts. A 3 stage event where you do x number of tasks. Unlike rift theses aren't all about the same thing.

Challenge mode Dungeons, 45 min barren run with leader boards and no loot. Still that was the barren run in a nutshell. Its a interesting concept, they are making them imposable to out gear which is also nice. The rewards is armor with no stats which you can transmog. Not sure how popular this is going to be but its something else to do that's not raids.

The Pandera And Monk Class. they look cool. The opportunity here is huge for gear styles and something really different. The fact that they start neutral and then join sides is perfect. I was really worried pre-blizzcon con that someone would end up with the boobie race ( the debate is still out on that for Cataclysm ). I shouldn't roll a monk as the RSI OOS will be insane. They don't have auto attack so you must do a action every move. They want a street fighter feel, so they should make high kick/punch low kick/punch skills.

Wrapping up, I feel that this expansion is what Warcraft needed. Its a holiday from itself to explore something different and I will be looking forward to its release which is set for some time next year.

Here is the updated Bingo Card. I was reluctant to cross off public quests and I left duo dungeons uncrossed as they really need to lock down what a PvE Scenario is. 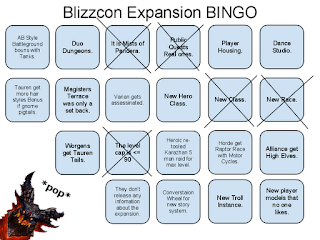