Steam tags were good idea, then users abused them and now devs

The prime example was Line of Defense by DEREK SMART.

Sure it was copping a lot of flak but the tag, 'Overpriced port of a moblie game' was very truthful even if he is spending to much time trying to defend that it isn't.

As stated in the FAQ for steam tagging beta:


Q. What if I don't agree with a tag that has become popular for my game?
A. Tags can be a good indicator of when there is a mismatch between how you perceive your game, and how your game is perceived by customers. Often this is simply because there is some piece of information regarding the game that customers feel is missing from the store page.

The game is perceived to be a mobile port. It screams of it on the store, the very first screenshot is this:

Still this isn't a post about what is and isn't porting. Its about the tagging system and how people perceive games.

Here are the current tags on the store page: 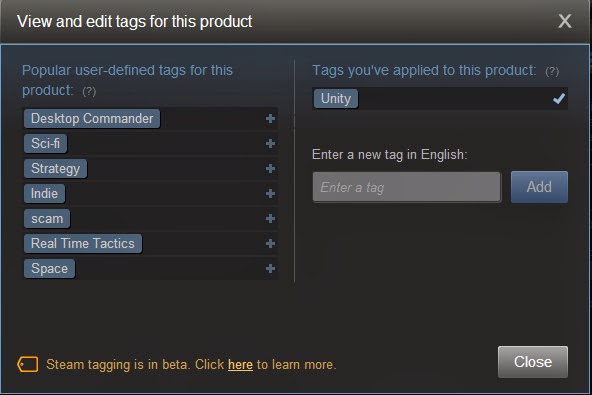 Scam might be a bit harsh, Overpriced yes, but its not a scam. Also I can't comment on Desktop Commander as that would require the game to exit to the desktop with no error or warning. Something that is very hard to do using Unity.

One thing that could cut down on targeted tag abuse would be making that only those who own the game can tag it but I don't think the tags should be so easily removed. Unless they are offensive in nature.

Anyway, tagging still has potential to be a great system. I have been tagging Unity built games ( like the one above ) so long as negative tags can be added without fear of being removed.
Posted by Quanhan at 10:04:00 AM