ID Software have announced that they are thinking of re-making Quake.

This has me excited but worried all at the same time.

Duke nukem Forever came out last week and its not the same game I enjoyed back in the mid 90's, Gone is the sense of exploration, action and fun. Instead we have the call of duty scripted, regen heath and halo weapon systems.

If they did this to Quake, I will skip over it much like I have with Duke.

I think this could turn out to be a long post, better put in a jump:

Since Duke came out its got me wondering why games are so linear now days. Doom was linear in that you went from level a to level b and only got out of sequence if you could find the chapters hidden level.

But the map design itself was more open. Alot of doom maps were broken up into quadrants where some of them were closed off to you unless you had the right key card. This in-itself is linear but you usually had a choice and got to explore.

There was also secrets and some times those secrets were entire sections of the map which were optional.

This was posted a few months back but keeps appearing in Duke reviews as its a good example: 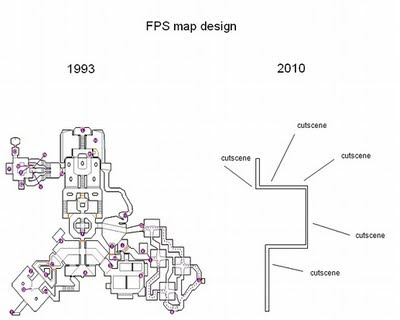 On the left is a Doom map on the right is a 2010 generic FPS or final fantasy XIII, its hard to tell. Dooms story ( and quakes ) could be summed up on a single page of A4 paper. The generic game on the left would be the same but the effort to tell the story would take up 3 books. ( 20 if its mass effect 2 ). Does this though enhance the gameplay, I think it does the first time you play but there is no urge to re-visit the game as you know whats going to happen and when.

The only reason I can think of why modern FPS have turned out like this is that maps have become harder to design. Games require more assets, more details. That is unless your Mass effect 2 where they have seem to have gone back to the Doom 1 style of room, crates and barrels.

Some games are trying, the Fallout 3 seriers is one. While a lot of the dungeons are linear, its your choice on how to find them.

The new Dues Ex should be open as well but I fear it will turn into the hallway/cutscene shooter of tomorrow.

What ever happened to designing a real building with real defenses then letting the player work out how to break into it.

I am giving Rage some slack as its new IP and so can play with game design but if you remake a classic you have to remake to be better.
Posted by Quanhan at 10:55:00 AM